Our group operates the long-term urban research tower 'Vancouver-Sunset', and a flux tower in 'Burns Bog', a restored wetland.

A research program funded by a Discovery Grant of the Natural Sciences and Engineering Research Council of Canada (NSERC) - 2012 to 2017.

Our research group develops methods to quantify and analyze GHG exchange through direct concentration and flux measurements of carbon dioxide, methane and nitrous oxide in the urban atmosphere. Our goals are to identify and quantify GHG emission (and uptake) processes in representative neighborhoods and allow monitoring of long-term GHG emission trends. We apply micrometeorological and biogeochemical methods, including mass flux measurements by the eddy covariance (EC) approach, closed-chamber measurements, and stable isotopes. Those methods are combined with detailed spatial models about the part of the urban surface that is directly influencing the measurements 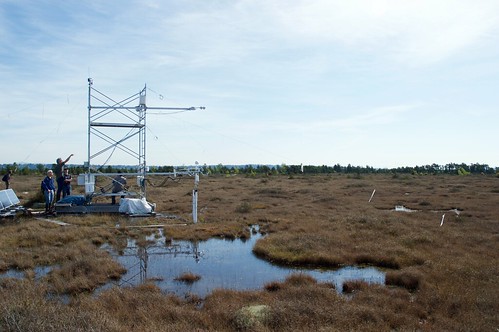 Part of the 20 km2 Burns Bog Ecological Conservancy Area (BBECA) in Metro Vancouver is currently undergoing restoration to promote its ecological recovery from past disturbances such as peat harvesting and associated drainage. The restoration management aims at raising the bog's water table by a large-scale ditch-blocking program to impede drainage. This rewetting of disturbed bog ecosystems may change emissions and uptake of long-lived atmospheric greenhouse gases. We perform year-round measurements of fluxes of methane and carbon-dioxide on a floating tower to retrieve emission estimates across seasons by means of eddy covariance (EC). This allows us to derive annual net CO2e emissions as a baseline for land-cover-based emission reduction or offsetting measures in Metro Vancouver.

In this network researchers from Universities and government institutions develop and incorporate an urban surface parameterization scheme in Canada's numerical weather forecasting system. As part of this effort, we run a validation field campaign in Vancouver (2007-2010) and focus on the role of irrigation in the urban water, energy and carbon balance.

A Leader's Opportunity Fund supported by the Canadian Foundation for Innovation (CFI), the British Columbia Knowledge Development Fund and UBC - 2009 - 2014 for research infrastructure.

The urban carbon cycle is distinct from most other terrestrial ecosystems due to the interaction between spatially and temporally highly variable sources and sinks and complex anthropogenic, biologic, and climatic controls. This infrastructure grant funds a tunable diode laser absorption spectroscopy system that will allow us to develop methods for a partitioning of urban carbon-dioxide exchange based on a stable isotope apporach.

The Burns Bog Ecological Conservancy Area in Metro Vancouver is large peat bog is regenerating after past peat harvesting and agricultural use. The project will assess and quantify greenhouse gas emissions and carbon sequestration potential related to different renaturation pathways and intervention options in Burns Bog. We determine and quantify the variability of soil efflux rates for two major greenhouse gases - carbon dioxide and methane in four different ecosystems in the sequence of renaturation in Burns Bog.

A research contract with the BC Ministry of Agriculture and funded by Growing Forward 2, a federal-provincial-territorial initiative - 2014.

Emissions of particulate matter from poultry facilities in densely populated regions, such as the Lower Fraser Valley, BC, can impact local resources, animal and human health. Particulate matter can further be a potential pathway for the transmission of diseases. In this research project we determine the effectiveness of vegetative buffers as a potential measure managing particulate matter emissions leaving poultry facilities. Using three-dimensional building and vegetation resolved atmospheric modelling, we investigate how vegetative buffers modify the airflow and possibly filter air flowing through them (Photo credit: BC Ministry of Agriculture). 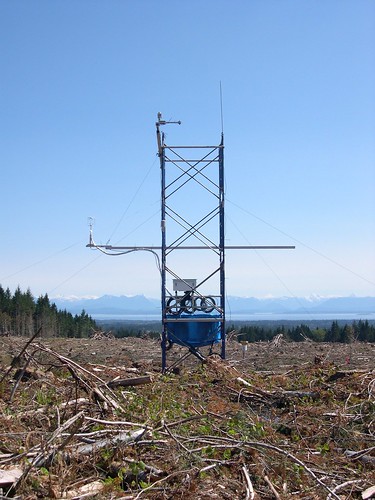 Stand-replacing disturbances, such as industrial harvesting, have a major impact on the exchanges of carbon (C) and energy between land and the atmosphere. The former forest carbon sinks become net sources due to the continued respiratory losses and to the absent or reduced photosynthetic uptake. This project, unlike most chronosequence approaches, used data from a well-studied Fluxnet-Canada Douglas-fir stand on Vancouver Island that reached harvesting age and was commercially harvested in 2011. We compared pre- and post harvest land-atmosphere exchange using eddy covariance and chamber measurements.

In an interdisciplinary team between landscape architects, remote sensing scientists and urban climatologists we developed an urban metabolism approach to neighbourhood-scale energy and carbon modelling. The modelling approach is driven by a novel combination of light detection and ranging data (LiDAR), efficient building energy modeling, ecological approaches and atmospheric measurements. Modeled emissions at fine resolution were directly compared against eddy covariance measurements on our urban flux tower at Vancouver-Sunset.

Impact of the mountain pine beetle outbreak on the carbon and water balances of lodgepole pine stands in the BC interior.

A Strategic Grant of the Natural Sciences and Engineering Research Council of Canada (NSERC) - 2009 to 2011 in collaboration with the provincial government and industry. Co-Applicants: A. Black, P. Burton, A. Christen, N. Coops, A. Fredeen, D. Spittlehouse, J. Trofymow.

In this program, we assessed and quantified the impact of different forest management strategies following Mountain Pine Beetle attacks on the regional-scale carbon and water cycles. Our research group worked on wind, turbulence and radiation transfer inside the attacked forest canopies. We developed approaches to determine the vertical sink and source distribution of carbon-dioxide, water and sensible heat, which allows us to determine the role of different layers of the attacked forest (soils, secondary structure, dead Lodgepole pine trees) and leads to improved modelling of growth conditions to assess management responses following insect attacks.

funded by a Discovery Grant and a Research Tools and Instruments Grant of the Natural Sciences and Engineering Research Council of Canada (NSERC) - 2007 to 2012.

In this 5-year program we completed a series of field experiments to improve and foster theoretical understanding of flow, turbulence and turbulent exchange processes inside and above porous surface-atmosphere interfaces (vegetation canopies, urban canopies). Further, we developed new approaches to quantify in-canopy advection processes and to track organized structures using thermal thermography. This helped to improve the modelling of air pollution and gas exchange within urban and forest canopies.

HX06 - a field experiment to study basic exchange processes in the canopy layer of a forest.

A research project funded by TU Berlin in collaboration with Universities of Basel, Freiburg and Padova - 2006

In this field experiment we investigated turbulence and trace-gas exchange in the trunk space of a homogeneous forest at Hartheim Research Station. We probed the in-canopy flow with a horizontal array of over 30 ultrasonic-anemometers and operated several gas-analyzers to determine the spatial variability and coherence of the flow in the lower canopy layer, including the role of dispersive fluxes and the convection velocity of coherent structures. This research guided other studies on trace-gas exchange on the representativeness of single-point measurements in the canopy layer.